They have a drum which has a series of rotating paddles (43, 46, 47 and 48) (whose number may vary, as well as the material of which they are made, and the material which they may or may not be coated with, and also the specific shape of each one) that can rotate around a shaft (36) and that are articulated by means of pivots (42) positioned at an intermediate point (preferably closer to the central shaft than to the ends), having a system of stops, some of them situated on the part of greatest (29) and others on that of least radius (44). The fluid impels the paddles, in such a way that if the current (19) comes from left to right, the paddles of the upper part of the semi-circle (46 and 47) swing around the pivots and are carried to remain in a position parallel to the direction of the flow, thus not presenting any resistance to the passing fluid, while the paddles on the lower part (48 and 43) of the semi-circle pivot with respect to their hinge and turn until they are braked by the stops (29 and 44), ending up situated in a radial position and thus offering resistance to the passing of the fluid. 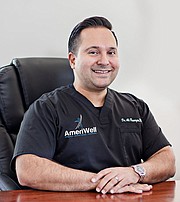 The said system has a series of gears formed of gear wheels (31, 32, 33 and 34) with different radii so that it increases the speed of turn, it being possible to insert the number of gear wheels and axles that one wishes, having a suitable radius to obtain the rotation speed of the rotor shaft (36) that one wishes. 1) represents the magnets or pieces of high magnetic permeability (with one or more magnets inside them) and (2) the stator windings, (5) the teeth or portions of high magnetic permeability of the rotor, (6) the turbine blades and (8) the ring to which the stator magnets with their windings have been fixed.

It is convenient that the ferromagnetic portions are composed of a large number of thin laminae of the material, superimposed one on top of the other and insulated in between by means of a coat of shellac or varnish and strongly compressed, or by any other suitable method to minimize Foucault currents.

In the case of utilizing one of the variable reluctance types of generators, the placing of the material of low magnetic permeability between the teeth of the wheel or on the rotating ring (depending on the case), in addition to avoiding turbulences being produced, makes the variation in flux greater, especially if the material used is a material of elevated diamagnetism.

4) of a non-magnetizable material, or by filling the space between them with the same (3′ in FIG. The “spacer” magnets or electromagnets of the lower part of the pseudo-ring with a C-shaped section or of the nozzle and the top of the inner cylinder or ring or system of rings should be more powerful than those of the corresponding opposite part, to compensate for the tendency of the blade runner to fall due to its own weight. A pair of wires (9) through which the generated current circulates comes out of each coil, being possible to connect those of the different coils to each other in an appropriate way so that the electrical energy generated can be extracted from the system by a single pair of cables. The portions of low permeability will preferably be diamagnetic (preferably of a high diamagnetism) and those of high magnetic permeability, ferromagnetic, although the ring could simply carry “teeth” of a high magnetic permeability material (5) (non-magnetized) and gaps (4). As the rotor turns, these portions of high and low magnetic permeability will move passing the air gap (52) of the magnet.

With the proposed non-watertight generators, the electrical system (both of the armature coils as well as the output terminals) is fixed, so that they will be able to be perfectly insulated. Another possible use of this equipment would be to use the generated electrical energy to obtain hydrogen and oxygen from water. For that and other reasons, it is convenient that the rotating drum of blades or scoops of the turbine be installed in the area of the critical section of a nozzle, preferably convergent-divergent (22) (for turbines of the type described in sections 1, 2, 4 and 5, preferably that of the type indicated in FIGS. In this case the turbines will be in the form represented in FIGS. 22 and 23), are similar to cycloidal turbines but with the difference that the articulated blades, instead of being connected to a rotating disc, are connected to an annulus (21) (whose thickness can be variable) that can rotate.

The stops (29) prevent the articulated blades from rotating beyond them and, by being pushed by the blades in motion, cause the drum to rotate. 29) represents the stops that prevent the articulated blades from moving farther, thus causing the turbine to rotate. The drum of blades or scoops can rotate freely, or around a fixed tube or cylinder (open or closed, hollow or not), or around a system of rings joined to each other by a series of axial braces, or around a cylinder with a system of rings on its periphery.

FIGS. 6, 7 and 8 represent different positions of the rotor and stator of a non-watertight ring-shaped permanent magnet generator, with the magnets joined to each other by their N poles and their S poles, forming a crown (case a, in the description). The rotor is formed by a rotating ring to which a plurality of permanent magnets (1) (preferably in the shape of a horseshoe, although it may be different) have been fixed. The stator could be formed by a variable number of magnets (1), preferably in the shape of a horseshoe, although they can also be toroidal, or any other shape that is considered convenient, and in all cases with an air gap, forming the core for the winding of the armature coils (2). It is not essential that (38) is made up entirely of one magnet (1), it can be that the magnet or magnets are only in a specific area (39 in FIG.

The pieces (38) can be kept rigidly joined to each other by means of pieces (7 in FIG. The number of magnets that surround the turbine circumferentially can be varied in each case. Bar-shaped magnets placed around the ring at a certain distance from each other, for example with alternating polarity (in such a way that if a magnet is joined to the ring by its north pole, the following is joined by its south pole) optionally joined to each other with a material of high magnetic permeability (53), as in FIG. Said nozzles can have their upper part different to the lower, the lower part being able to be totally flat or with a certain curvature (concave or convex), and the upper part being able to have an angle of opening and a curvature in the part closest to the critical section greater than the lower part, in such a way that the water at the inlet is directed more towards the lower part of the blade or scoop runner of the turbine than towards the upper part.

FIGS. Ingle dolor muscular . 36 and 37 represent an axial turbine with an open center, that in FIG. 25 and 26, so that the cylinder will always rotate in the same direction. They will preferably be installed in the area of the critical section of a convergent-divergent nozzle. The diameter and other dimensions of the rings can be variable, as well as the materials of which they are constituted and the materials with which they may or may not be coated. The said pieces (38) (or magnets, if they are formed by a single magnet-(1) in FIGS.

This system of rings can also be installed on the periphery of an inner cylinder, if the only aim is to reduce friction. In order to do that the vehicle should have a suitable system to place it in an appropriate position and direction in the middle of the marine current, from which energy could be obtained. Para el dolor de la rodilla . 33) inside them; (2) represents the stator windings, (5) the teeth or portions of high magnetic permeability of the rotor and (4) the gaps or portions of low magnetic permeability of the rotor, (41) the central part, the disc or structure upon which the rotor ring with its rotary shaft (36) is mounted. This is especially applicable to all the metallic elements of the system, which should be so protected and, in addition, should not come into direct contact with the carbon fiber to avoid galvanic corrosion.